With support from scientists, the Extension System, and local schools, a PROSPER Community Team will never feel like it is working alone.

The PROSPER Delivery System was designed so that small and strategic Community Teams would have access to the latest research from university scientists and benefit from the expertise and consistent support of the Extension System. These Teams work closely with local schools to support the positive development of youth and their families and they make sure the programs are sustained over time and consistently delivered with quality.

Community Team Leaders are county-based Extension educators/agents who devote the equivalent of 25% of their full-time responsibilities to leading their Community Team. Their primary function is to ensure that the team is implementing the PROSPER approach with fidelity and that their team is systematically progressing through the four developmental phases. Team Leaders also serve as the Team’s connection to the university-based Prevention Coordinator Team. The School Co-leader works with the Extension Team Leader to facilitate school involvement and ownership, ensure proper implementation of the school-based program, and coordinate team activities. While the term “Co-Leader” does not imply an equal division of leadership for the team, it underscores the critical role of the partnering school district.

PROSPER Community Teams start with between eight and ten members, so they are relatively small compared to many community coalitions. These small strategic teams are led by county-based Extension personnel and co-led by a school district staff member. Team members may include social- and health-service providers, school administrators, parents and youth from the community, and representatives from: faith-based institutions, parent groups, businesses, law enforcement, and the juvenile justice system. Above all, team members should represent the diversity of the community.

Goal 2— Build and maintain a productive Community Team including:

Partners Making up the
Community Team 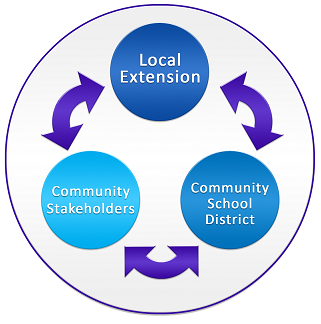